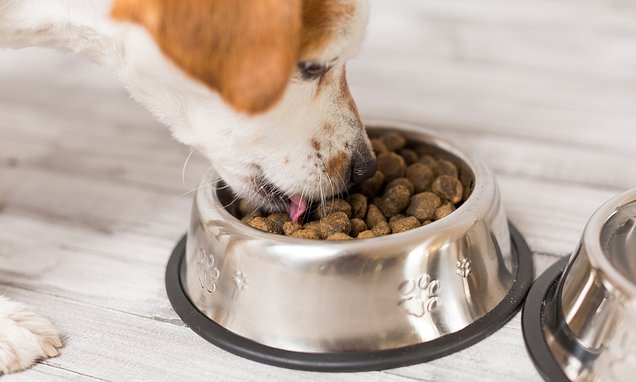 Raw pet food is said to be similar to a dog’s natural diet if they were in the wild, and is claimed to give them fresher breath and a shinier coat.

But a study has found the food, made mainly from offal, uncooked meat and bones, contains food poisoning bugs including E.coli and salmonella. 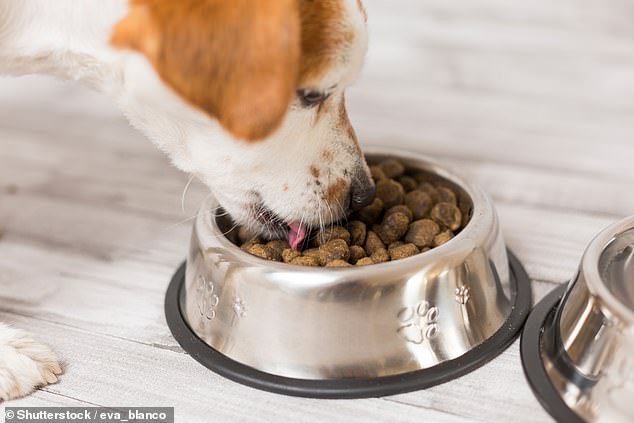 A study has found that raw dog food, made mainly from offal, uncooked meat and bones, contains food poisoning bugs, including E.coli and salmonella

Scientists say this may be harmful for elderly people, babies and people with poor immunity, who could fall ill by handling food bowls or kitchen equipment, or from their dog licking their face.

The research, published in the Veterinary Record journal, looked at raw dog food made by 10 different manufacturers, based in countries including Britain and Sweden.

Researchers found a third of the 60 samples they took contained E.coli, with almost a third containing another bug, Clostridium perfringens, known to cause outbreaks of food poisoning. Salmonella was found in seven per cent of samples.

The authors, led by Dr Josefin Hellgren at the Swedish University of Agricultural Sciences, state: ‘The results obtained in this study show that it is highly important to handle raw meat-based diets carefully and to maintain good hygiene, due to the potential risks these feeds pose to human and animal health.’

‘Bacteria such as E coli and Salmonella can cause significant gastrointestinal disease in animals. Pets can also shed potentially harmful pathogens present in raw food into their environment, so there is a risk to owners both in handling the food and coming into contact with the animal.

‘Pet owners who choose to feed a raw food diet should be aware of the potential health risks and take full precautions while storing and handling the food.’ Adele Waters, editor of the Veterinary Record, wrote in 2017 that a ‘pro-raw’ movement has started among pet owners, who are typically well-educated, middle-class and part of the ‘country set’.

However there are concerns about bugs in the meat, which would have been killed off if it were cooked. Unlike commercial feeds, raw meat products are not heat-treated or freeze-dried.

All 60 of the raw dogfood samples tested in the study contained Enterobacteriaceae – the group of bacteria containing E.coli.

More than half had levels beyond the EU limit of 5,000 bacteria per gram, meaning they did not meet satisfactory hygiene standards.

C. perfringen was found in 18 out of 60 samples, with salmonella found in four. Campylobacter, which can lead to life-threatening sepsis, although it more usually causes diarrhoea and vomiting, was found in three samples, having survived after the food was frozen.

The products, which were all intended for dogs, contained uncooked meat, edible bones and organs from animals including chickens, turkeys, pigs and ducks.

However most of the bacteria species identified are not known to cause infection, apart from E coli.

Experts advise that raw dogfood is kept frozen until use, kept separate from other food, and that it is handled with its own kitchen equipment.

They say bacteria in the juices from raw meat dog food can splash and spread to other foods and surfaces, while dogs can spread it by ‘kissing’ their owners’ faces after eating.