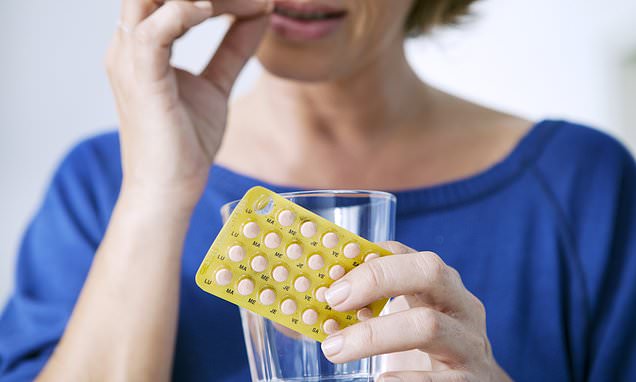 Scientists believe the common treatment may keep blood sugar in check, therefore protecting against the development of type 2 diabetes.

A group of women who had been on HRT for a year had far lower rates of the condition than volunteers given a placebo.

Tests revealed they had improved markers of insulin sensitivity and blood glucose since they began the treatment.

The study comes amid a nationwide crisis in HRT stocks – and a bombshell Oxford study that found it raised the risk of breast cancer by a third.

Hormone replacement therapy may slash the odds of menopausal women getting diabetes by controlling their blood sugar, scientists find

Around one million women in the UK turn to treatments to manage the menopause, according to the National Institute for Health and Care Excellence.

HRT, which comes in the form of pills, patches and gels, is used by the majority.

It works by replenishing levels of oestrogen and progesterone, which lower as a women approaches menopause, in turn combating symptoms such as hot flushes and night sweats.

Hot flushes raise the risk of women suffering from heart attacks or strokes later in life, according to a study from the University of Pittsburgh.

Researchers, led by Dr Rebecca Thurston, used The Study of Women’s Health Across the Nation (SWAN), which spanned 20 years.

Analysis found frequent hot flashes at the beginning of the study doubled the risk of CVD events.

Persistent hot flashes over the study were linked to an 80 per cent increased risk of CVD events in the subsequent 20 years.

The results are considered strong compared to previous studies that have attempted to link hot flushes with CVD risk.

Most studies have relied on subclinical measures of CVD, which is not hard evidence of whether a patient actually went on to have a heart attack or stroke.

They have also relied upon womens’ recalling how many hot flushes they had years earlier, which can be biased by memory.

The study findings will be presented in September during The North American Menopause Society Annual Meeting in Chicago.

The Women’s Health Initiative (WHI) is an organisation at the forefront of debating the benefits and risks of hormone therapy.

The study, led by The Ohio State University Medical Center, used data from a prior study by WHI on 1,362 women.

Cases of type 2 diabetes were 21 per cent lower in the group of women taking hormone therapy consisting of a combination of oestrogen and progestin.

The researchers looked at various markers in the women’s blood which were collected at the beginning of the study and a year after taking hormone therapy.

These markers are called metabolites, and are molecules which reflect the inner workings of a person’s metabolism.

Approximately 370 metabolites were recorded in the WHI study, but the researchers only looked at nine.

These nine metabolites have previously been linked with the development of type 2 diabetes, including glycine, glutamine, and a host of amino acids.

Of the nine targeted metabolites, seven were ‘significantly decreased’ with the use of combination hormone therapy.

Five were significantly decreased with the oestrogen-only therapy, which is usually only taken by women who have had their womb removed in a hysterectomy.

Women aged 70-79 benefited most from their hormone therapy, with the effects lessened in younger women.

Dr Heather Hirsch, lead author of the study, said: ‘Interestingly, we found that the decreases were more pronounced with the use of estrogen and progestin combined than with estrogen alone.

‘This result parallels the findings from the WHI on the effect of hormone therapy on the incidence of type 2 diabetes.’

The findings will be presented during The North American Menopause Society (NAMS) Annual Meeting in Chicago this month.

Dr Stephanie Faubion, NAMS medical director, said it is valuable for doctors to be aware of the potential risks and benefits of menopausal treatments, ‘given the debilitating effects of diabetes and its increased incidence in the US’.

While hormone therapy has some proven benefits, such as preventing weakening bones, there are potential risks, too.

Women who take HRT for more than one year have a higher risk of breast cancer than women who never use it.

An Oxford study, published in August, found HRT raised the risk of breast cancer in women aged 50 to 69 by a staggering 32 per cent if they had been using HRT for at least five years.

The danger was twice as high for patients on the treatment for a decade.

The studies come amid a nationwide shortage of HRT, in which two-thirds of HRT treatments have been hit by shortages.

They include Evorel and Elleste, the two most popular brands, which are prescribed to upwards of 100,000 women a year.

MENOPAUSAL WOMEN WHO HAVE NIGHT SWEATS VULNERABLE TO COGNITIVE DYSFUNCTION

Menopausal women who endure night sweats sleep for longer – but are also vulnerable to cognitive dysfunction.

Scientists at the University of Illinois at Chicago were surprised to find women who had more frequent night sweats also slept for longer.

But even more ironic, however, was the finding that these same women became more vulnerable to prefrontal cortex deficits, including decreased attention and executive function, as their sleep duration increased.

Total sleep time, however, was unrelated to memory performance.

Hot flushes in the day time had no effect on total sleep time.

‘[It] raises the possibility that hot flash treatments could benefit cognition in these women through effects on sleep.’

The study was conducted on women who had a history of breast cancer, and may only be applicable to them.

The study findings will be presented in September during The North American Menopause Society Annual Meeting in Chicago.