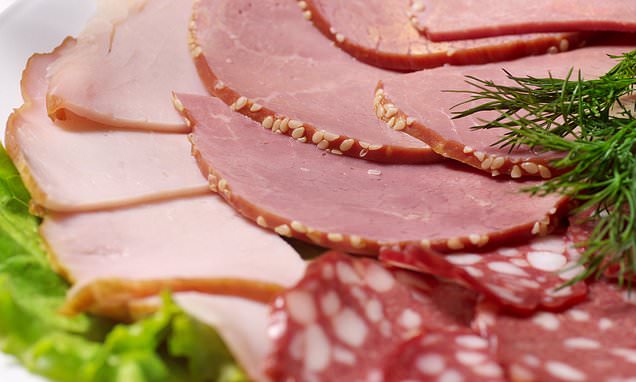 Eating too much charcuterie may cause cancer, according to French health bosses who’ve dealt a blow to their country’s beloved cold meat industry.

Carcinogenic additives used to give hams their famous pink colour are to blame.

Emmanuel Macron’s Government has pledged to crack down on the use of nitrates and nitrites, saying it is vital to limit their use to just ‘strictly necessary’ quantities.

Calls for similar action are growing in the UK, following a World Health Organization (WHO) ruling in 2015 that labelled processed meat as carcinogenic.

Sir Chris Whitty, England’s chief medical officer who shot to fame for helping guide the nation through the Covid pandemic, is leading the movement to change British bacon forever.

About 90 per cent of bacon sold in UK supermarkets contains the chemicals.

In addition to bowel cancer, nitrates and nitrites have also been linked to breast and prostate cancers. 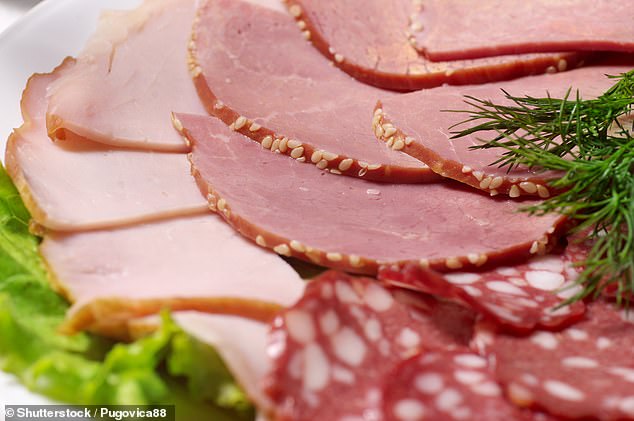 French food chiefs say they intend to cut the use of nitrites and nitrates, which are used as a preservative in charcuterie meats after confirming consumption raises the risk of colon cancer (stock image)

Nitrite and nitrate are commonly used for curing meat and other perishable produce.

They are also added to meat to keep it red and give flavour.

Nitrate is also found naturally in vegetables, with the highest concentrations occurring in leafy vegetables like spinach and lettuce.

It can also enter the food chain as an environmental contaminant in water, due to its use in intensive farming methods, livestock production and sewage discharge.

Nitrite in food (and nitrate converted to nitrite in the body) may contribute to the formation of a group of compounds known as nitrosamines, some of which are carcinogenic – ie, have the potential to cause cancer.

In 2015 the World Health Organisation warned there were significant increases in the risk of bowel cancer from eating processed meats such as bacon that traditionally have nitrites added as they are cured.

The current acceptable daily intake for nitrates, according to the European Food Safety Authority (EFSA), is 3.7 milligrams per kilogram of body weight per day.

The EFSA’s acceptable daily intake for nitrites is 0.07mg per kilogram of weight each day.

Bowel cancer was thrust into the spotlight by late presenter Dame Deborah James — known as ‘bowel babe’ — who raised millions for charity in her final days battling the disease.

Yesterday, Anses, France’s national food safety body, said its review had reached the same conclusion as the WHO, linking risk of bowel cancer to exposure to nitrites and nitrates.

Nitrites are widely used in processed meats to extend their shelf life, by warding off bacteria that can cause diseases like salmonella, listeriosis, and botulism.

Crucially, they also add an alluringly tangy taste and a shopper-seducing fresh-pink hue to products like bacon.

Nitrates, on the other hand, are most commonly used as a fertilizer in farming and can sometimes be found in water supplies as result, but can also be added to meats as a preservative.

Anses, the French equivalent of the UK’s Food Standards Authority, said it ‘recommends reducing consumption of the range of nitrates and nitrites by deliberately limiting exposure through food consumption’.

‘Nitrites and nitrates ingested through food and water are known to cause the formation of nitroso compounds, some of which are carcinogenic and genotoxic to humans,’ it continued.

The agency estimated French people get over half of their daily exposure to nitrites through eating charcuterie.

But it added that 99 per cent of the population do not exceed the healthy daily limits for exposure to nitrites or nitrates.

Anses acknowledged that its proposed action could lead to products like cooked hams having a shorter shelf life. 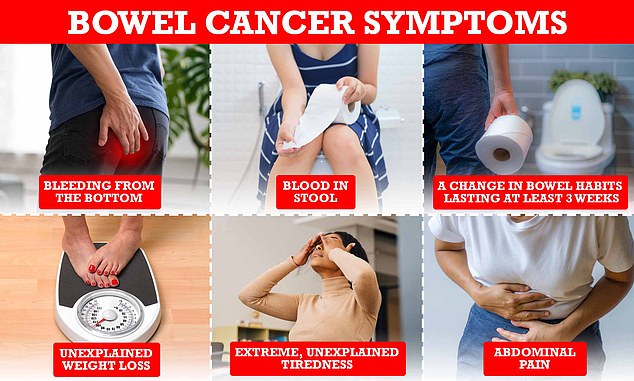 WHAT IS BOWEL CANCER?

Bowel, or colorectal, cancer affects the large bowel, which is made up of the colon and rectum.

Most cases have no clear cause, however, people are more at risk if they:

More than nine out of 10 people with stage one bowel cancer survive five years or more after their diagnosis.

This drops significantly if it is diagnosed in later stages.

According to Bowel Cancer UK figures, more than 41,200 people are diagnosed with bowel cancer every year in the UK – and 17,000 die.

It affects around 40 per 100,000 adults per year in the US, according to the National Cancer Institute.

Anses advised people to only eat 150g of processed meats per week, about 20g per day, equivalent to about one slice of ham.

Current UK guidelines say Britons should only eat 70g of cooked red or processed meat a day, over triple the French guidelines of 20g per day.

The French move falls short of a full ban on the use of the chemical additives that was feared by the nation’s processed meat industry, which is estimated to be worth £5.65billion a year.

Limits on nitrite and nitrate consumption in the country were proposed in February.

But some British experts and politicians, led by Conservative MP Dr Daniel Poulter, are calling for an outright ban this side of the channel.

Dr Poulter, a former health minister under David Cameron, has gained cross-party support for his motion, which also has the support of the Government’s chief medical officer, Sir Chris.

They want meat producers to use more natural alternatives that perform the preservation function without the additional cancer risk.

British meat producer groups have hit back, saying some manufacturers had already reduced the use of nitrites by up to 60 per cent compared to historical levels.

And there are already nitrite-free options available in some British supermarkets.

FICT chairman Bernard Vallat said: ‘If we caused microbial accidents because there are no more nitrites it would be even worse than the hypothetical risk mentioned.’

About 43,000 new bowel cancer cases are recorded in the UK each year making it the 4th most common cancer in the country.

Cancer Research UK estimates about 13 per cent of these cases (about 6,000) were caused by eating processed meat.

In the US, about 140,000 people are diagnosed with the cancer each year.

The signs of colorectal cancer include a persistent change in bowel habit, such as looser, runnier poos, blood in stool, and abdominal pain after eating.

While most people with these problems do not have bowel cancer, people are advised to see their GP if they have symptoms for more than three weeks.