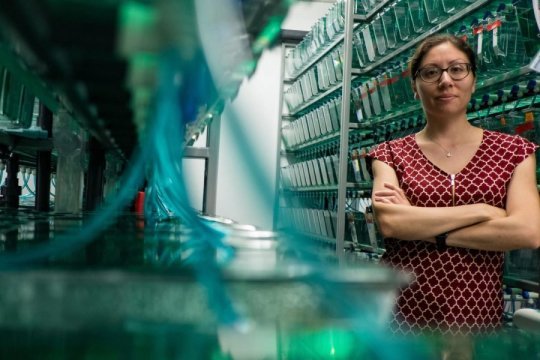 A new type of zebrafish that produces fluorescent tags in migratory embryonic nerve precursor cells could help a Rice University neurobiologist and cancer researcher find the origins of the third-most common pediatric cancer in the U.S.

Rosa Uribe, who was recruited to Rice in 2017 with a CPRIT Scholar grant from the Cancer Prevention and Research Institute of Texas, created the transgenic fish with colleagues at the University of Illinois at Chicago and California Institute of Technology and co-authored a new paper about them this month in the journal Genesis.

The zebrafish line produces fluorescent tags that glow brightly in different colors based on the behavior of a gene called SOX10 that is active in neural crest cells, transient embryonic stem cells that give rise to many cell types in the body, including neurons and cartilage.

“You can see they’ve already started to migrate that way, and a lot of them are transitioning,” Uribe said in her office as she traced the movements of green neural crest cells in a time-lapse movie playing on her computer. In humans, neural crest cells are the point of origin for neuroblastoma, a common pediatric cancer, and Uribe’s hoping the new fish can provide clues the disease.

“You can see that a lot of them are transitioning,” she said of the cells on her screen. “Some of them are dividing there, there, there. And then they turn off the green, which means they’re done dividing.”

Why the cells stop dividing is one of the key questions she hopes to answer. SOX10 is one of more than 20 varieties of SOX proteins, and all of them regulate rapid cell division in fast-growing embryos. The same SOX proteins are also often found activated in cancer cells. Finding the “off” switch for SOX10 in neural crest cells could potentially lead to treatments for cancers where SOX proteins play a role, she said.

Uribe earned her bachelor’s degree in cell and molecular biology from San Francisco State University and her doctorate from the University of Texas at Austin. She joined Rice following a postdoctoral fellowship at Caltech, where she first began to study the enteric nervous system — another area of focus for her lab — which forms from neural crest cells.

“Neural crest cells are stem cells that form from the earliest portion of our central nervous system, the neural tube,” said Uribe, assistant professor of biosciences. “They express SOX10 in addition to a bunch of other really important genes.”

To view neural crest cells during embryonic development, Uribe’s team keeps a stock of breeder fish in a state-of-the-art fish room with hundreds of tanks. Embryos — for the new reporter line and more than a dozen others — are removed from the tanks by hand each day and brought to the laboratory for observation.

Zebrafish are used for the studies for several reasons. First, SOX and many other genes in the fish are virtually identical to genes that serve the same basic roles in humans. Second, biologists have amassed a huge body of knowledge about zebrafish, which have been studied as a model organism for decades. Finally, zebrafish breed and develop quickly — a new batch of embryos can be studied each day in Uribe’s lab — and the fish are transparent, which means researchers can watch what’s happening inside them while they are alive.

Using a variety of methods and microscopes, Uribe and her students immobilize live embryos and take photographs to trace their development over a period of hours. For example, the neural crest cells, which first appear in zebrafish embryos about 12 hours after fertilization, were tracked and observed for up to four hours.

“Neural crest cells also do something else that’s relevant to cancer,” Uribe said. “They undergo something called the epithelial-to-mesenchymal transition, or EMT, shortly after they form, and this is what allows them to break away and migrate to the various places in the embryo.”

EMT is important for embryonic development because it allows cells to revert backward along their developmental path and become more stem-like. This malleability allows embryonic cells to form new tissues, but researchers have found many metastatic cancers that use the same genetic circuitry.

Metastasis, or the spread of cancer to other parts of the body, causes more than 90 percent of cancer deaths. EMT is the switch employed by many cancer cells to break away and become metastatic.

Having the ability to observe neural crest cells from the moment they form until they finish migrating is one key to understanding them. Uribe’s team will use the new cell line for this, in addition to others that have different colored tags for different reporter genes. They’ll also mix and match genes in new strains of zebrafish to test what happens when cells make either too much of a specific protein or too little. Uribe’s lab will use a variety of techniques for this, including CRISPR-Cas9.

Microscopes capable of gathering time-lapse images of the variously colored glowing cells are also critical, and Uribe’s lab has seven of them. These include a state-of-the-art robotic instrument with tiny hoses and pumps that can draw a single embryo from a numbered test chamber up through a hose, transport it to the microscope focal plane, bring it into focus, rotate it for photos from any angle and then return it and repeat the process for up to 95 more embryos.

“For the migration time-lapse images there is software that’s capable of following individual cells for hours,” Uribe said. “We can get angles and trajectories, maps of routes taken by one cell or groups of cells, and we can get quantitative data, like velocities and proliferation rates.”

Uribe said CPRIT funding was critical for the purchase of lab equipment that she’ll be using to trace the origins of neuroblastoma in neural crest cells.

“Our work on neuroblastoma could only happen with the support of CPRIT,” she said.