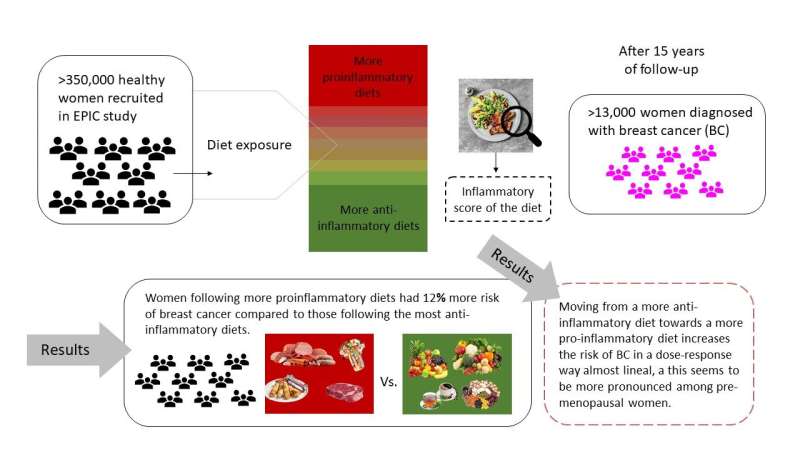 A new study of more than 350,000 women found that women with diets incorporating more foods that increase inflammation in the body had a 12% increase in their risk of breast cancer compared to women who consume more anti-inflammatory diets. The new findings are being presented at NUTRITION 2021 LIVE ONLINE.

The study authors found that moving from a more anti-inflammatory diet toward one that increases inflammation upped breast cancer risk in an almost linear manner. Foods that increase inflammation include red and processed meat; high-fat foods such as butter, margarines and frying fats; and sweets including sugar, honey and foods high in sugar. Fruits, vegetables, legumes, tea and coffee all have potentially anti-inflammatory properties.

“Most studies examining diet and breast cancer risk have focused on single nutrients or foods rather than the whole diet,” said the study’s first author Carlota Castro-Espin, a predoctoral fellow at the Catalan Institute of Oncology and Bellvitge Biomedical Research Institute in Barcelona, Spain. “People consume food not nutrients, thus examining overall dietary patterns, rather than single components of diets can lead to more accurate conclusions when analysing associations with a health outcome such as breast cancer.”

The new results are based on data from the European Investigation into Cancer and Nutrition (EPIC) study, a prospective study that recruited more than 500,000 participants across 10 European countries starting in the mid-1990s. The study included more than 13,000 breast cancer diagnoses during approximately 15 years of follow-up.

The typical diet for EPIC participants was measured for a year using food frequency or diet history questionnaires. The researchers used this information to calculate an inflammatory score for each study participant based on their intake of 27 foods.

Their analysis showed that the increase in breast cancer risk due to pro-inflammatory diets appears to be more pronounced among premenopausal women. They also found that the association did not vary by breast cancer hormone receptor subtypes.

“Our results add more evidence of the role that dietary patterns play in the prevention of breast cancer,” said Castro-Espin. “With further confirmation, these findings could help inform dietary recommendations aimed at lowering cancer risk.”