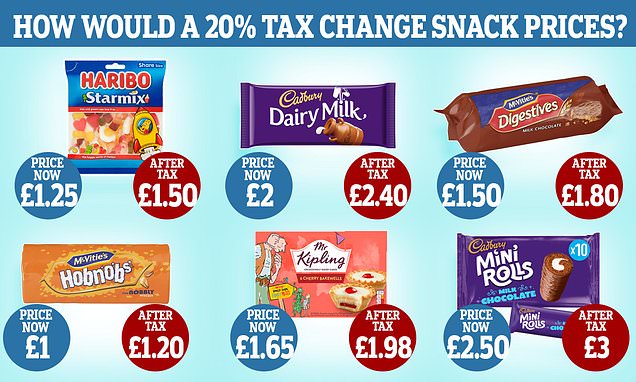 ‘Snack tax’ on cakes, sweets and biscuits could cut the UK’s obesity rate by 2.7% in one YEAR by pricing families out of sugar-laden treats (so, how much would YOUR favourite cost?)

Taxing cakes, biscuits and sweets could tackle obesity and lead to people in the UK losing 2.8lbs (1.3kg) a year, a study has claimed.

Researchers say slapping a 20 per cent tariff on the sugary snacks could be more effective than the current fizzy drinks tax.

Campaigners have already called for the broader ‘calorie tax’ to add to the price increase on drinks, adding that targeting sugar on its own isn’t enough.

Figures show a quarter of people in the UK are now obese, meaning they’re at a greater risk of cancer, heart disease and stroke.

In a study published in the British Medical Journal, scientists predicted the average family could eat almost 9,000 fewer calories each year if the prices of their favourite treats were inflated.

And this, they claimed, could cut the country’s obesity rate by as much as 2.7 per cent, bringing around 446,000 people back to a healthy weight within a year. 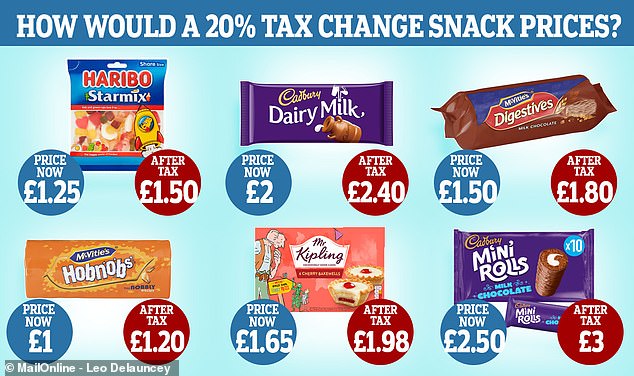 A 20 per cent price rise like the one suggested by the researchers could help to reduce obesity by pricing people out of buying as many unhealthy snacks as they do now, the study claimed. The products pictured are examples only, and are not mentioned in the BMJ study – prices were taken from the Tesco website on September 4, 2019

Researchers led by the London School of Hygiene and Tropical Medicine (LSHTM) looked at grocery shopping habits of families in the UK.

Their concept of a 20 per cent price increase on high-sugar snacks could push the price of a pack of 10 Cadbury Mini Rolls from £2.50 to £3.

The team said the option was ‘worthy of further research’ as the Government continues to look for new ways to curb obesity, particularly in children.

‘The UK has a unique profile when it comes to free sugar intake,’ said the study author Dr Pauline Scheelbeek, a health researcher at LSHTM.

WHAT IS THE SUGAR TAX?

From April 2018, soft drinks companies have been required to pay a levy on drinks with added sugar.

Fruit juices and milk are not included in the tax.

Some drinks, including Fanta, Lucozade, Sprite, Dr Pepper and Vimto, had their recipes changed so they contained less than 5g of sugar and the price did not need to be put up.

However, others like Coca Cola and Pepsi refused to reduce the amount of sugar and, as a result, the price of them increased.

The Government has predicted the levy will raise £240million a year, which will be spent on sports clubs and breakfast clubs in schools.

The sugar tax raised £153.8m in the first six months after it was introduced, between April and October 2018.

They worked out how many calories people would get from a certain amount of money spent on snacks, then estimated how this would change if the price rose.

If a family spent £10 on sweets, for example, and the price of sweets went up by 20 per cent, they would only get as many sweets as they could have bought for £8.33 beforehand.

This effectively prices people out of overeating and leads to them eating less sugar and fewer calories because they can’t afford as much food as before.

Low-income households in which people are already overweight would be most dramatically affected by the price change, the researchers estimated.

Price inflation could lead them to eat 4,805 fewer calories from chocolate and sweets, and 3,709 fewer from biscuits.

Wealthier families appeared to make different shopping choices – middle-income households (£20,000 to £49,999 per year) would stand to lose 4,395kcal from biscuits, while the wealthiest homes were hardest hit in the cake department, with predicted losses of 4,182kcal per year.

And overweight middle-income households were likely to lose the most weight, with an average 4.6lbs (2.1kg) over a year.

Low-income households were predicted to lose 2lbs (911g) over the year, lowerbecause they may be more likely to compensate with other unhealthy foods.

Dr J Bernadette Moore, an obesity expert at the University of Leeds, wrote in a comment in the journal: ‘Substitution and displacement effects in response to food tax and subsidy policies are complicated and difficult to predict.

‘The reformulation of products in response to consumer demand can also have unintended consequences, such as substituting one unhealthy ingredient for another.

‘Lastly, fiscal policies aimed at reducing consumption of sugar, salt, and saturated fat might be useful, but they fail to incentivise the consumption of healthy foods.

Dr Moore added that the 20 per cent suggested in Dr Scheelbeek’s study was particularly high, claiming that other ‘sin taxes’ are typically lower than 10 per cent.

And the researchers themselves said their research could be flawed by people eating unhealthily outside of the home, or by the calorie intake to weight loss equation not being a perfect representation of how people gain and lose fat.

The LHSTM team’s research comes after campaign groups Action on Sugar and Action on Salt called for a calorie tax to be introduced by the UK Government.

They didn’t suggest a specific charge, as the London team did in their study, but said in August: ‘If you want people to make healthier choices, you have to hit them in the pocket where it hurts.’

In light of today’s research, Holly Gabriel, a nutritionist at Action on Sugar said: ‘The UK Soft Drinks Industry Levy has been remarkable and unique in that it allows for significant product reformulation by manufacturers in order to avoid paying the levy.

‘This has already resulted in a much bigger reduction of sugar content of drinks in the UK than originally anticipated.

‘Fat is a bigger contributor to calories in the diet than sugar and therefore essential that manufacturers are encouraged to reduce both in order to tackle the UK’s obesity crisis.’

WHAT IS THE GOVERNMENT DOING TO STOP OBESITY?

Proposed plans to restrict the number of calories in pizzas, pies and ready meals were last year revealed as part of drastic Government moves to try and cut down on obesity.

A tax on added sugar in drinks came into force in April, requiring companies to hand over more of the money they make from drinks which contain more than 5g of sugar per 100ml of liquid.

As a result, many soft drinks have had their recipes changed in order to avoid paying the tax and putting prices up. Sugary drinks are the biggest single source of sugar for children and teenagers.

The Government is also considering making it compulsory for all restaurants and fast food outlets to display the number of calories in each meal on their menu.

Some food outlets already do this but there can be unexpected numbers of calories in popular dishes, and the Government is consulting on the plans before a decision is due in spring.

In March this year, Public Health England warned Brits to crack down on the number of calories they’re eating, advising people to consume no more than 1,600 per day.

The watchdog says adults shouldn’t eat any more than 400 calories for breakfast, 600 for lunch and 600 for dinner – this would allow for some snacks, experts said.

Examples of 600-calorie meals include a tuna pasta salad and a small cereal bar, a chicken salad sandwich and a pack of crisps, or half a pepperoni pizza with a quarter of a garlic baguette and a banana.

Previous: Back pain: Best exercises to relieve pain felt all over the back
Next: Promising new target to combat Alzheimer’s disease
Related posts
Pet Care News