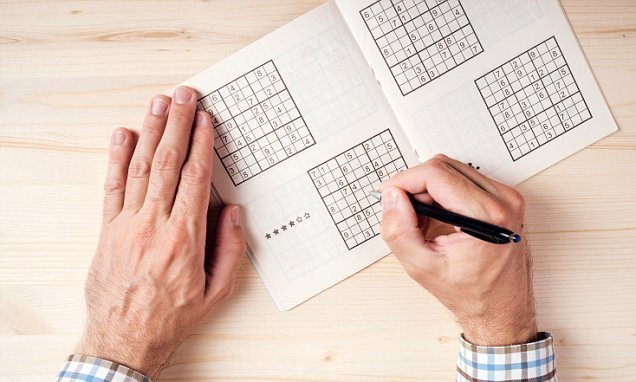 Brain training games do not make you smarter, according to scientists.

Practising a game like sudoku or using a brain training app might make you better at it but it won’t boost your IQ or general brain power, a study claims.

And instead, researchers suggest people exercise more, socialise and make sure they get enough sleep if they want their mind to be sharper.

Experts expected people to perform better on tests if they practise for a long time on a similar exercise, but they were wrong.

In fact those who do brain training do not perform any better than people who don’t, suggesting the numerous mobile apps do not work. 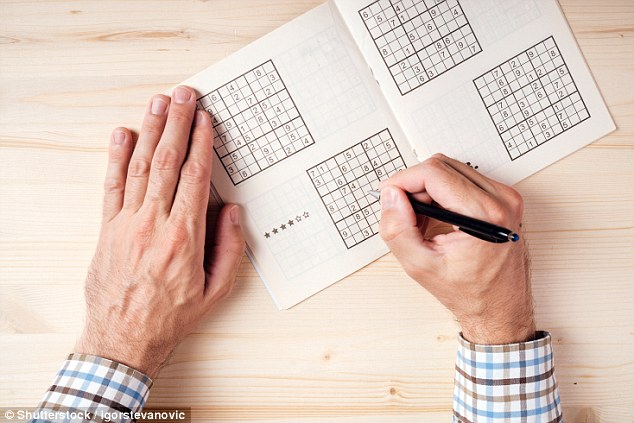 Games like sudoku or online brain-training apps do not improve people’s overall IQ or even their ability to do well on similar tests, scientists at Western University say

Researchers at Western University in London, Ontario studied the effect of brain training games in an experiment involving 72 people.

People in one group used a brain-training game, designed to improve people’s working memory, on a computer for 13 hours over a period of 20 days.

The working memory is the part of the brain responsible for learning, storing information and preventing memory loss.

The group then did a test similar to what they had been training on, alongside the second group of people who didn’t train at all.

High scores in the training game did not translate to higher scores in the final test, and people who ‘trained’ their minds did not perform better.

‘Brain training does not lead to IQ improvements’

The study’s author Bobby Stojanoski said: ‘We [thought] that if you get really good at one test and train for a really long time, maybe then you’ll get improvement on tests that are similar.

‘Unfortunately, there’s just no evidence to support that claim.

‘In fact, we show that doesn’t even lead to improvements to the things that are similar to the training test, let alone anything in a more general sense like IQ.

‘Sleep better. Exercise regularly. Eat better. Education is great. That’s the sort of thing we should be focused on.

‘If you want to improve your brain go for a run’

‘If you’re looking to improve your cognitive self, instead of playing a video game or playing a brain-training test for an hour, go for a walk, go for a run, socialize with a friend. These are much better things for you.’

Dr Stojanoski’s findings add to past research which revealed brain-training does not have any effects which transfer over to general brain power tests.

He added: ‘As a scientist, I would never say anything is definitively closing the door on anything.

‘In order to say that, you would have to test every single possible condition and every possible combination of conditions to really be sure.

‘But I think this study provides convincing evidence that brain training doesn’t lead to improvements beyond the task you trained on.

“If you want to get really, really good at one task then just keep doing that task and you will get better at that.

‘But you shouldn’t expect to get better at another task just because you got better at that one particular thing.’

They add that no single food acts as a ‘silver bullet’ for improving or maintaining brain health.

The experts have put together the following diet and lifestyle advice to help people preserve their brain health as they age.

Include the following in your diet:

Red meat consumption should be limited

Eleven researchers from the Global Council on Brain Health, including experts from the University of Exeter, met on September 12-to-13 2017 to discuss the impact of diet on the brain health of adults over 50.

Their recommendations are based on the evaluation of studies investigating the impact of nutrients on the cognitive function of older adults.

Previous: Low-dose birth control: Effectiveness, risks, and side effects
Next: Can a spray REALLY stop you snoring or help you to lose weight?
Related posts
Pet Care News