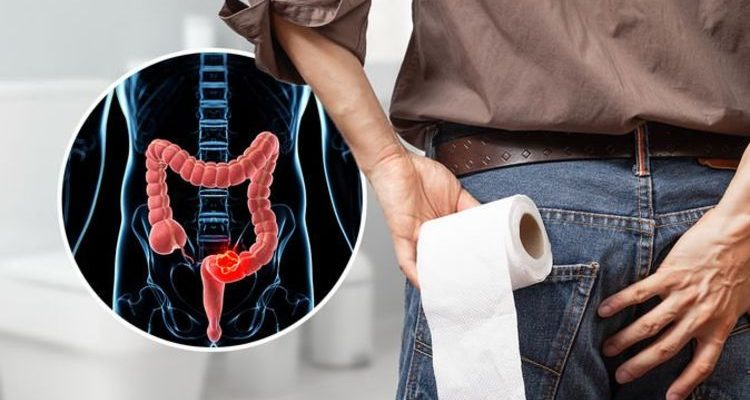 Home » Health News » Bowel cancer symptoms: Is your poo runny or hard? The consistency that could spell trouble

Bowel cancer is a general term for cancer that begins in the large bowel, which is part of your digestive symptom. When cancerous cells multiply and divide in this region of the body, it can play havoc to your constitution. Many signs can show up when having a poo.

According to the Grafton Square Surgery, the consistency of poo can be a telltale sign you have bowel cancer.

If your poo becomes more runny, it can spell bowel cancer, warns the health body.

As it explains, another persistent change in your bowel habit to watch out for is having to poo more than usual.

It is important to note that most people with these symptoms do not have bowel cancer.

Other health problems can cause similar symptoms.

“These symptoms should be taken more seriously as you get older and when they persist despite simple treatments,” warns the NHS.

According to the health body, you should see a GP If you have any of the symptoms of bowel cancer for three weeks or more.

The GP may decide to:

“Make sure you see a GP if your symptoms persist or keep coming back after stopping treatment, regardless of their severity or your age. You’ll probably be referred to hospital,” adds the NHS.

Your risk of developing bowel cancer depends on many things including age, genetics and lifestyle factors.

Anything that can increase your risk of cancer is called a risk factor. Those that lower the risk are called protective factors.

Having one or more risk factors doesn’t mean that you will definitely get bowel cancer, however.

The role of some parts of our diet remains unknown or uncertain. But we do know that some foods can definitely affect the risk of bowel cancer.

Many studies have shown that eating lots of red and processed meat increases the risk of bowel cancer.

According to Cancer Research UK, it is estimated that around 13 out of 100 bowel cancer cases (around 13 percent) in the UK are linked to eating these meats.

Processed meat is any meat that has been treated to preserve it and/or add flavour – for example, bacon, salami, sausages, canned meat, or chicken nuggets.

The government recommends that people eating more than 90g of red and processed meat a day should reduce it to 70g or less.

Other risk factors include: