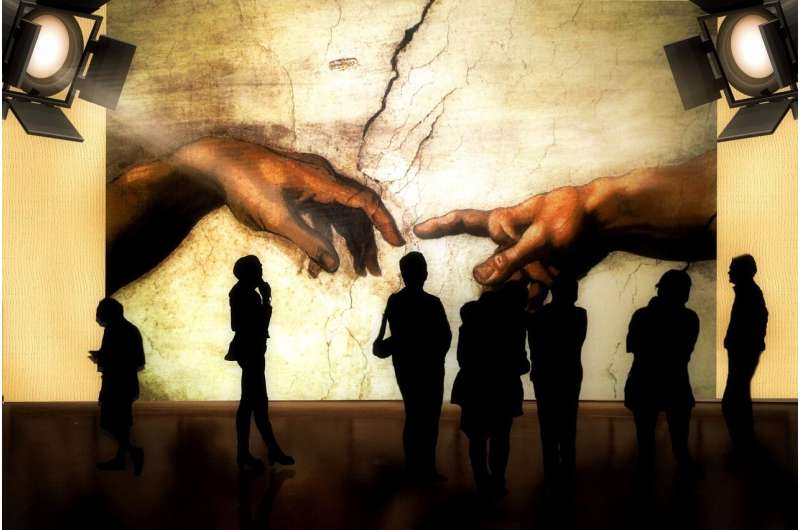 How much someone likes a piece of artwork can impact their memory of when they first encountered it and which direction they were facing, finds new UCL-led research.

The findings show that aesthetic experience is not limited to just the visual features of a piece of artwork, but also the moment in which it was viewed.

The study, published in PNAS, asked 124 participants to look around a virtual reality art gallery, which featured 48 selected abstract artworks by internationally-recognized digital artists, including Sara Ludy and Yoshi Sodeoka.

Participants navigated through the on-screen gallery using arrow keys on a computer keyboard, as in a computer game. This meant that they had to make a deliberate action to turn to look at each picture.

After they visited the gallery researchers asked the participants to perform three tasks, focusing on recognition, spatial memory, and liking, respectively.

First, participants viewed several artworks and reported on whether they had just seen them in the gallery or not.

Next, they were asked to place artworks on a museum map, and to indicate in which room, and on which wall they had seen the picture, as a test of spatial memory.

Finally, participants were asked to rate how much they liked each piece of artwork, using a sliding scale.

The researchers found that the more a participant liked a piece of artwork, the better they remembered which wall of the gallery they had seen it on, i.e. which direction they were facing during the visit.

“The actions that we make as we navigate towards an artwork have been neglected up to now, but our experiments show that the way we turn and orient towards an artwork is associated with our aesthetic response to it, and with the experience we retain after the aesthetic encounter.”

The researchers tested these findings with two additional studies involving over 150 further participants. One study required participants to focus on abstractness of artworks rather than on how much they liked them, while the other administered the memory test 24 hours later.

Again, they also found the same association between whether the viewer liked a piece of artwork and how well they remembered which direction they were facing when they saw it. This suggests that the link between liking and remembering facing direction is not just due to thinking about liking, and that the link endures in memory.

Professor Patrick Haggard (UCL Psychology & Language Sciences) who supervised the study, said, “It’s an old adage that ‘beauty is in the eye of the beholder’. But studies in experimental esthetics still tend either to search for intrinsic properties of art objects that could explain their aesthetic value, or just to describe how individuals differ in their aesthetic responses.”

“The research we report suggests why these purely objective or purely subjective approaches to esthetics can often disappoint. We think these approaches may both underestimate the crucial role of links between liking an artwork, and the first-person perspective.”

“When we like something, we store in memory not only the thing we like, but the spatial details of the moment when we discovered it. This feature of aesthetic memory could explain why our encounter with an artwork can often be so salient, and apparently even life-changing in some cases.”

Previous: Too many Māori and Asian people are drowning—can better cultural understanding reverse the trend?
Next: Germany to pay more for children’s meds as shortages spike
Pet Care News