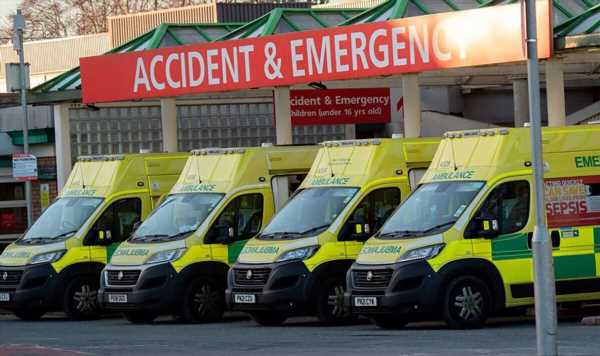 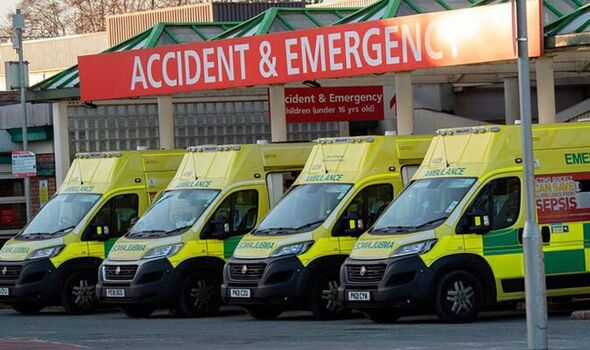 As the NHS struggles under immense pressure, staff have told how ambulance handovers are taking hours, claiming “it isn’t safe”. Patients, who are already being forced to wait hours for an ambulance, then have to endure a second agonising wait, often hours long, to be seen by doctors who are desperately trying to allocate a scarce supply of beds.

The handovers – where paramedics transfer care of a patient brought in via ambulance over to hospital staff – are taking up to three hours as hospitals are full, says a regional paramedic.

Waiting time to actually see a doctor in Greater Manchester can vary anywhere between two and more than eight hours, one doctor told the Manchester Evening News, and are predicted to worsen.

One day last week, the patients the doctor saw “24 hours ago for admission were still here in A&E”.

“We end up being used as an extra ward”

With hospitals full to the brim, ambulances are being “treated as extra wards”, claims one North West Ambulance Service (NWAS) paramedic.

Patients are kept inside, watched over by a trained NHS staff member, while doctors inside frantically try to make space.

But patients arriving in ambulances are competing with the crowds already in A&E and those already filling beds.

That means paramedics can end up being stuck outside hospitals or in corridors “for hours”. 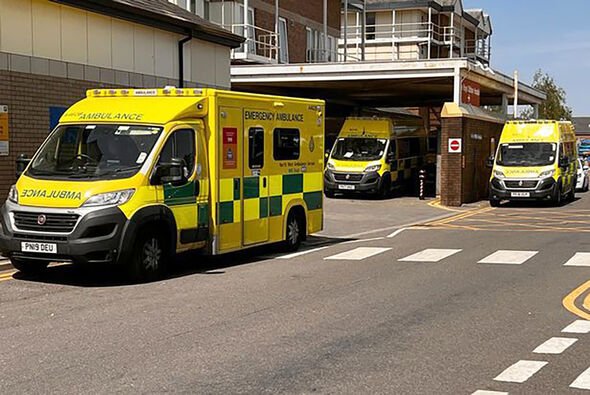 “There’s a lack of resources and money and staff,” the paramedic continued, speaking on condition of anonymity.

“From a handover point of view, it’s very, very difficult sometimes because the A&E departments are full.

“We’ll have staff who will turn up at a hospital and they might be there for two or three hours.

“They might not have had a break that day as well. They might be finishing. If you finish at midnight and you get to the hospital at half 11 and you’re stuck, you’re stuck.

“You can’t leave your patient because we want to make sure our patient is OK. We end up being used as an extra ward sometimes. Certainly, patients in the back of ambulances still haven’t stopped, delays at A&E – and this is across the board, certainly in Greater Manchester.

“We can’t build more beds or put more staff into A&E departments. Unfortunately, what it means is we end up stuck on corridors looking after our patients while the hospital does everything it can – or certainly the staff do everything they – can to try and accommodate us.”

Still, having nowhere to put patients is having dire consequences for their safety and risks doctors missing serious cases, continues the junior doctor. There’s only so many pairs of hands to assess an unprecedented number of seriously ill patients, and only so many beds to put them in.

“It’s a hospital wide issue, certainly not just A&E feeling those pressures. Hospital beds are full meaning the backlog in A&E increases. Today the patients I saw 24 hours ago for admission are still here in A&E.

“Our ability to flex and absorb some pressure is better after Covid, but whether that is always a safe amount of flex I think is debatable. Patients routinely state that waiting times is their number one complaint – it is the reason they sometimes leave without being seen.

“You hope the serious cases return or are picked up in other ways like primary care, but with GPs also struggling to meet demand there’s no guarantees. That’s why staff feel so strongly on this issue – it isn’t safe.”

A service in crisis

The alarm bells come as the country’s ambulance services all declared a rise to the highest level of alert last week following a spike in demand, which was already seriously straining the emergency responders. North West Ambulance Service (NWAS) cited a rise of 21 per cent in serious injuries and illnesses being reported in comparison to this time last month.

Ambulances have been seen queueing up outside hospitals across Greater Manchester, including Stepping Hill.

While other A&E departments, such as the Royal Bolton Hospital’s, have had to put out warnings urging patients to avoid coming unless their complaint is life-threatening as waiting times grew beyond four hours.

NWAS also shared that the uptick in heat-related 999 calls was putting extra pressure on the service.

While the soaring temperatures might only be contributing a handful of cases heading to hospital, that’s only adding to the major delays the NHS has been facing following the peak of the Covid-19 pandemic, says a junior doctor in Greater Manchester. 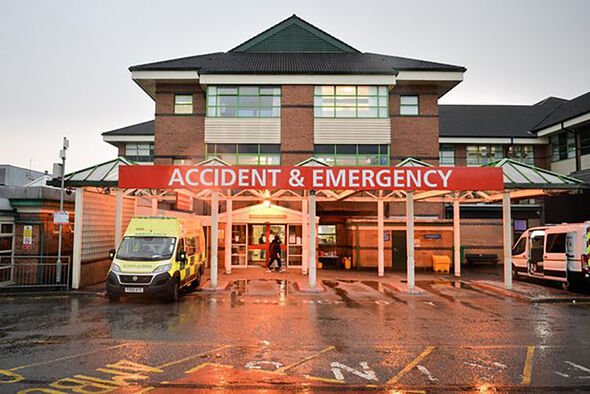 “The pressure will remain the same when the heatwave ends”

The NHS Standard Contract sets the target that “all handovers between ambulance and A&E must take place within 15 minutes with none waiting more than 30 minutes”.

Despite this, almost 1 in 5 ambulance handovers were delayed by at least 30 minutes in 2021-22, reports the Nuffield Trust.

But currently those handovers can take hours, says the junior doctor.

“Social care has its own limits and we can’t safely discharge patients in a timely manner.

“With any strain – heat, Covid this week – on an already overstretched system, you will see a snowballing effect on waiting times.

“There is a lot of talk about heat as it is topical, but in a few days when all the heat settles, the waiting times will remain roughly similar to see a doctor in A&E.

“You’ll still find the ambulance crews queueing to offload patients because there isn’t a safe place to put them.

“We are talking hours for handovers over the last two days. Waiting times to be seen by a doctor varies hugely between time of day and night.

“It can be anywhere between two hours if things are flowing better, to some waiting up to eight hours.

“Some very low priority cases may wait longer than that still, especially overnight.”

Without the right social care – whether that’s a spot in a care home or even a weekly visit from a nurse – available, people who are medically fit to go home cannot be discharged.

This year, that number grew into the high hundreds in Greater Manchester as the numbers depending on hospitals rose, so too did those relying on social care packages at the end of their inpatient treatment. 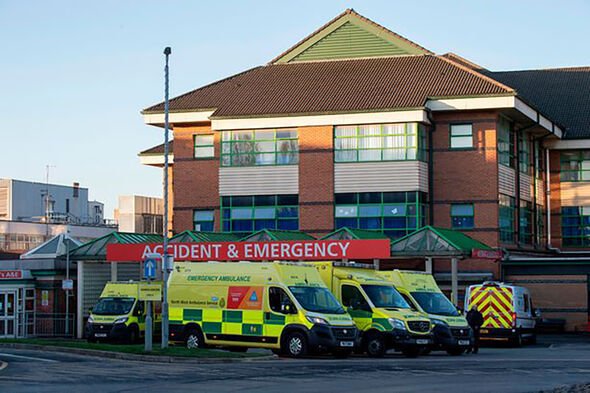 The paramedic believes that another reason the system is so pressured is the sheer volume of calls to 999 that are not life-threatening emergencies.

But as patients battled medical issues through the pandemic which they are now seeking help for in their droves – having worsened in the meantime – GPs cannot meet demand.

“People don’t want to wait for a GP appointment so end up going to A&E. And people are still coming in now with stubbed toes, demanding to be seen, and then wondering why they’re not being seen for 12 hours.

“It’s because we’re incredibly busy with some very sick people. There’s no easy solution for handovers and turnaround times with hospitals.”

What do health chiefs say?

Some 1,475 people waited more than 12 hours in A&E for a ward bed in June in Greater Manchester, after doctors admitted them.

This week, ambulance bosses have admitted that 999 response times have been hit by delays, particularly for less urgent calls.

But the service continues to urge people who are facing life-threatening emergencies to come forward.

A North West Ambulance Service spokesperson said: “We are continuing to work closely with hospitals and the wider health systems to mitigate the challenges created by hospital handovers and have implemented a package of measures to review and minimise patient harm.” 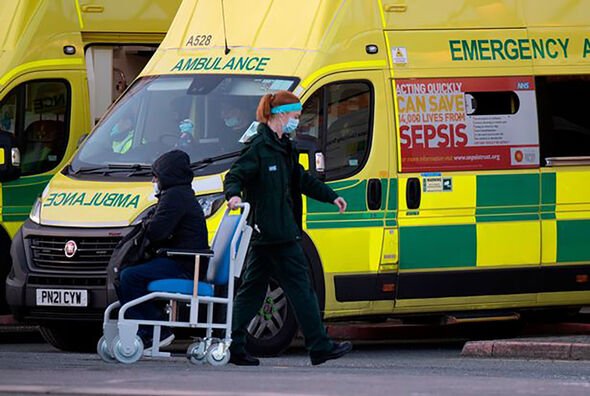 Nationally, the NHS boss wrote a letter to trusts urging hospitals to take “immediate steps” to reduce ambulance waiting times outside A&E departments to under 30 minutes amid warnings of “high risk to patients” during the hot weather.

The letter from Stephen Powis, national medical director of NHS England, acknowledges the problem and suggests ways to speed up the process of handing patients over from paramedics to clinicians to avoid long waits in hot and stuffy ambulances.

Mr Powis outlines concerns around “increased risk” to patients waiting for hospital beds in the heat, while oxygen used for long periods in enclosed spaces increases the risk of Covid infection as rates continue to rise.

Not only that, but the heatwave is expected to generate increased demand for ambulances as people fall ill with heat-related conditions.

Mr Powis, who warns hospital bosses to take “immediate steps” to reduce delays by “creating capacity” in hospitals, also urges staff to move patients out of emergency departments and into “observation areas” as soon as possible to create space. “Additional beds” should be found elsewhere in hospitals.

In the letter to trusts, Mr Powis says that “timely discharge” – to facilities including care homes – should be a priority.

Meanwhile, clinicians should make ‘risk-based decisions’ about “use of estate” and “deployment of workforce”.

Health chiefs in Greater Manchester are carrying out emergency planning and response meetings – which featured heavily during the Covid-19 response – as they anticipate heatwave pressure breaking over the NHS. Hospitals’ alert levels are changing a number of times each day as they monitor the numbers of patients in A&E and coming in via ambulance, the Manchester Evening News understands.

The Greater Manchester Strategic Coordinating Group is designed to plan for all types of major incidents and played a key role in the region’s fight during the height of the pandemic.

The group has now been meeting over the last week to formulate a response to the increasing temperatures, according to senior sources in the region’s NHS system.

Nicola Firth, chair of Greater Manchester chief nurses group, said: “We are grateful to staff, volunteers and carers working across NHS, social care and voluntary and community organisations at what is an incredibly busy time for health and care services.

“Rising Covid-19 cases, staff absences and the hot weather have placed more pressure on all services including the ambulance, urgent and emergency care and community services.

“Our health and care services are busy all year round, but periods of adverse weather can have a significant impact.

“The heat can affect anyone, however, can have a severe impact on the elderly, those with underlying health conditions and young children.

“We ask everyone to take care in the hot weather and enjoy responsibly, staying hydrated, using sunscreen and hats and importantly, checking in on friends and family who may need more support.

“We have responded proactively to this forecasted weather, acting to minimise adverse effects on patients, visitors and colleagues.

“We have worked with partners across Greater Manchester to share information to support people in the heat and continue to work closely with wider system partners to manage the impact of the heat on services.

“The NHS is there for its patients in extreme weather, with more options than ever before.

“For those feeling the heat, NHS 111 online and phone services can give advice on self-care or where best to go for treatment, as can local pharmacists.”