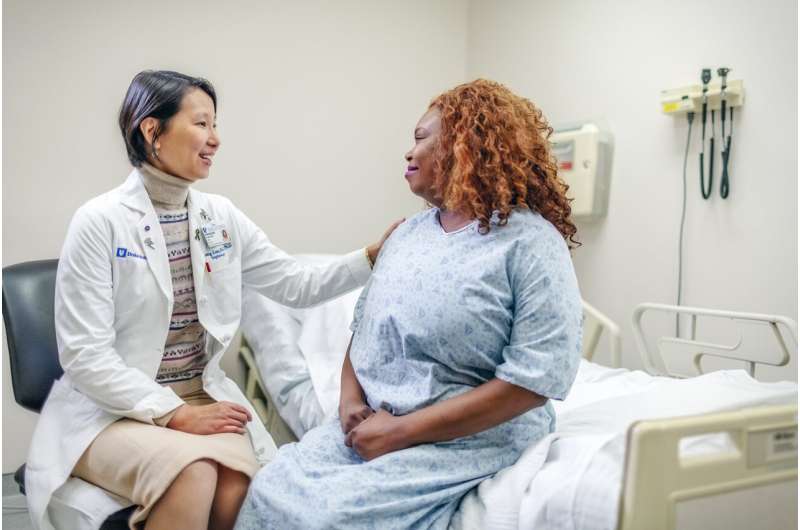 Strokes that occur on the right side of the brain can sometimes subtly impair social communication, which can be difficult for clinicians to assess.

But these impairments are a lot less subtle for the patients and their families, who often have their lives and livelihood upended, leading to significant life changes such as job loss and divorce.

Clinical researchers have developed a few diagnostic tools for right side (right hemisphere) stroke survivors, but the tools have been largely based on data from white patients.

That’s a problem, according to Duke speech pathologist and assistant professor Jamila Minga, Ph.D., CCC-SLP, because the few diagnostic tools available may be biased against the people most affected by stroke. Black men and women are twice as likely to have a stroke compared to white adults, and a person’s linguistic tendencies can vary based on their race and gender.

A new study from Duke and North Carolina Central University (NCCU) researchers, which Minga led, verifies the suspicion that race changes how communication impairments present themselves.

Minga has found that some right brain stroke survivors ask fewer questions. But this new study also found that a person’s race—independent of brain injury—affects their inclination to ask questions.

The research appears on January 10 in the Journal of Speech, Language, and Hearing Research.

While a stroke is just as likely to occur within the left or right side of the brain, research on stroke-related communication deficits has mostly focused on people who have survived a left hemisphere stroke.

“That’s largely because communication impairments after a left hemisphere stroke are more overt,” said Minga, who recently joined Duke as an assistant professor in the department of head and neck surgery & communication sciences.

Instead, right hemisphere stroke survivors have what clinicians call apragmatism—a difficulty understanding and producing language that is appropriate for different settings and situation. For example, Minga recalled the time she visited a patient’s room for a speech assessment and while his wife sat in a chair beside him, the patient asked Minga to join him in his hospital bed. He wasn’t joking or being deliberately crass.

“He could produce language. He was completely intelligible. His sentence structure, grammar and morphology were all fine,” Minga said. “The appropriateness? Not so much.”

It’s this subtlety in speech and social conventions that makes communication impairments so hard to pinpoint in right hemisphere stroke survivors, which leaves many undiagnosed and without assistance, Minga said.

Another study by Minga had found that right hemisphere stroke participants asked fewer questions when getting to know a new person, inspiring her and others to measure the quantity and quality of question asking as a potential diagnostic tool.

“Everyone recognizes what a question is, no matter what language you speak,” Minga said. “It’s easily quantifiable. And questions are used to initiate, maintain and dissolve relationships. They’re key to social communication.”

To address whether race affected a stroke survivor’s question-asking habits, Minga analyzed five-minute snippets of conversation from 32 women who had participated in a prior study and measured how many questions they asked while getting to know someone new. The participant pool consisted of an equal number of Black and white women, half of whom had sustained a right hemisphere stroke.

As Minga had found before, right hemisphere stroke participants asked fewer questions than their non-stroke counterparts no matter their race during the get-to-know-you chat with an unfamiliar person (a female speech pathology graduate student).

However, when Minga and her team analyzed the results by race, they discovered that no matter the stroke condition, Black women asked half as many questions as white participants, about 20 on average.

The results highlight how diagnosing communication impairments resulting from a right hemisphere stroke may need to be adjusted based on race.

The research team is following up on this study to see whether pairing Black participants with a Black conversation partner changes the nature of question asking. (The vast majority of speech pathologists are white; only 4% identify as Black).

Minga hopes this work motivates clinicians to consider providing more information to patients rather than assuming someone’s reservedness is due to a lack of curiosity, especially for Black women.

Previous: Q&A: Looking ahead at digital health, biotech funding in 2023
Next: Thousands of excess deaths recorded in UK in 2022 amid ongoing strikes
Pet Care News