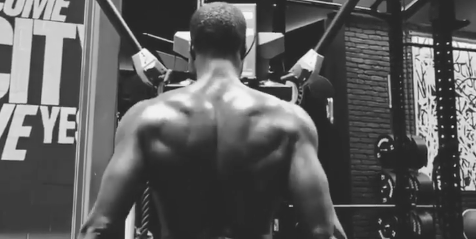 Yahya Abdul-Mateen II wasted no time hitting the gym at the start of the new decade. The actor, who launched to stardom in 2018 after portraying Black Manta in Aquaman and Doctor Manhattan in Watchmen last year, posted a video of a workout while training for his next role, which promises to be his biggest yet: The Matrix 4.

While it’s unclear exactly whom the actor will play in the fourth installment of the Matrix franchise, the Illuminerdi recently reported that the Us actor will portray a young Morpheus—the iconic role originally portrayed by Laurence Fishbourne.

When Abdul-Mateen II broke down his Watchmen workout for Men’s Health, he described his training goals for The Matrix. “I want to be able to look good and be cut and lean, but also move and be quick,” he said. “That requires its own type of workout.”

In the clip, Abdul-Mateen II takes on a series of intense exercises, most of which target his posterior chain.

Back at it. Matrix Mode 💪🏿WOAH!

He starts with a round of sprints on a SkiErg machine, which ramps up his heart rate, burning fat and challenging his entire body. Next, Mateen II takes up a med ball for rotational wall slams. He’s breaking out of the sagittal plane of movement (front-to-back and up-and-down) to include some transverse plane (side-to-side) and rotational plane (rotational) work, which makes the routine more natural, since people move in all three planes in real-life activities.

Renegade rows are next. If you want to try those yourself, Men’s Health fitness director Ebenezer Samuel, C.S.C.S. advices that you make sure to own the plank position and use light weights. Abdul-Mateen II caps off the series with a loaded sled pull, working his lower body and back, and a series of pulls on a Keiser machine, which you shouldn’t attempt if you don’t have the proper coaching or equipment. Instead, opt for a more traditional lat pulldown.

“Do you believe that my being stronger or faster has anything to do with my muscles in this place?” Morpheus once asked Neo in the first installment of The Matrix series. Strength and bulk might not count in the Matrix, but in real life (and when Abdul-Mateen II shoots the next movie), they do. From his intense workout routine, it looks like Abdul-Mateen II will absolutely be in great shape to look the part, in the Matrix and outside of it.