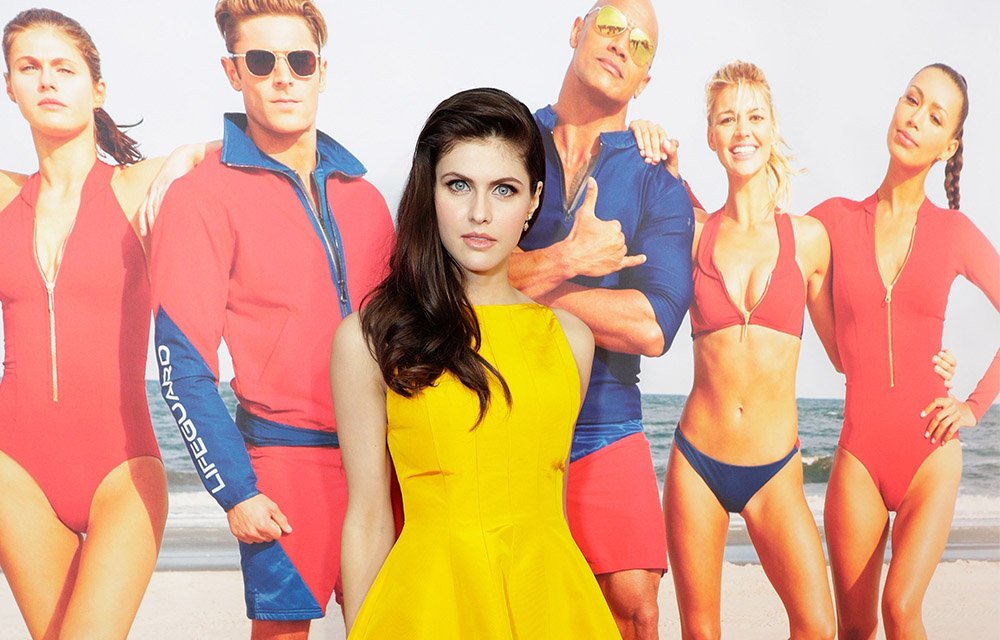 Her name is Summer in the big-screen adaptation of Baywatch and she’s a true fan of the sand, even out of character. The girl had to spend three months of her life in a swimsuit.

In the reboot, she plays a rookie lifeguard and the love interest of Zac Efron, he of the maximus washboardius abs. All of these beautiful people, all of that muscle! “The ongoing joke is that everyone in the movie is supposed to be supernaturally attractive,” says Alexandra, 31. “Really, I’ve never done anything where I’ve thought about my body as much. You are literally in a bikini the entire day. I even wore a swimsuit when I auditioned with Zac.”

Once she landed the role, she signed on with trainer Patrick Murphy to transform her body from yoga-slim to Baywatch-cut. Her logic? “Patrick trains Zac; Zac’s body is insane.” Her number one goal, however, was unexpected: to put on weight—in the form of sexy muscle mass, adding what Patrick calls “visual lines of definition.” The first few weeks of training were so tough, Alexandra says, there were times she had to take a break because she was overwhelmed with nausea. The four-or-five-days-a-week routine involved hour-long, high-intensity workouts using free weights, sliders, TRX straps, resistance bands, and BOSU balls—all good for running wobble-free through the sand (slo-mo optional).

RELATED: Kayla Itsines Shares Her Advice For Working Out On Your Period

As intense as the workout was, Alexandra was so happy with the results that, a year after wrapping the movie, she still works out with Patrick, though now just twice a week. We catch up with her one afternoon in a bare-bones gym tucked away in West Hollywood as he leads her through her least favourite exercise—”Abs! I hate them!” she puffs breathlessly. But after she’s done, she exclaims, “For the first time in my life, I have real abs!”

RELATED: Exactly How Kate Hudson Gets Her Rock-Hard Abs, According To Her Trainer

These suits ain't free. @ilfenator & @alexandradaddario will save your life, make you laugh and break your heart. Get ready, summer is here May 25th. #BeBaywatch

Just don’t count on her flaunting them at the beach this summer. “I’m so pale, I wear cover-ups and bring lots of sunscreen,” she says. Growing up in Manhattan, the Long Island beaches were where she chilled, preferably with a book. Favourites include Steve Martin’s autobiography, Born Standing Up, and anything by David Sedaris and Augusten Burroughs. “All these writers have had incredibly bad things happen to them and have dealt with it with an amazingly dark sense of humour and social commentary that I relate to. I like dark humour.”

#Repost from @ilfenator: Baes on baes on baes! Even in slow motion we're always on time. #Dembabes #Demboys #Baywatch

That affinity comes in handy when dealing with the dating scene in Hollywood. “I date, but I’m really nervous around boys. I get very tentative,” Alexandra admits. At one point she signed up on Tinder—”I thought, Maybe I’ll meet the love of my life there,” she says, laughing. “But people have recognised me and it’s embarrassing.” She has found one solution to dating awkwardness, though: yoga. “I’ve gone on yoga dates with guys, which I love. They might get grossed out by me because I sweat so much, but that’s how you know if they’re a keeper.”

Eventually she’d like a family, but right now Alexandra is focused on her career—and with five films coming out in the next year, her future is as bright as the coastline. “It’s mind-blowing how things have changed,” she says. “I’m doing projects I love, meeting cool people, going to cool parties. The little kid in me is yelling, ‘Holy sh*t, what am I doing here?'”

This article originally appeared on Womenshealthmag.com.