A volunteer for a little over two years now, professional musician Martin Agee initially began volunteering his time as a way to reconnect with animals after grieving the loss of his beloved dog, Melody. Though Martin began by providing general shelter support, he soon found himself drawn to another volunteer opportunity—the ASPCA Storytelling Program.

“Storytelling was designed specifically to socialize victimized dogs brought in through the ASPCA’s partnership with the New York Police Department (NYPD),” says Kris Lindsay, Senior Director of the ASPCA’s Animal Recovery Center (ARC) and Canine Annex for Recovery and Enrichment (CARE). “The dogs often have a wide range of socialization experience, with varying levels of medical and behavior issues.”

But as Martin began to explore the program and saw the calming effect reading had on the dogs, it became clear that he had a talent that many others didn’t, and it was something that he thought could be beneficial for the recovering dogs—playing the violin. 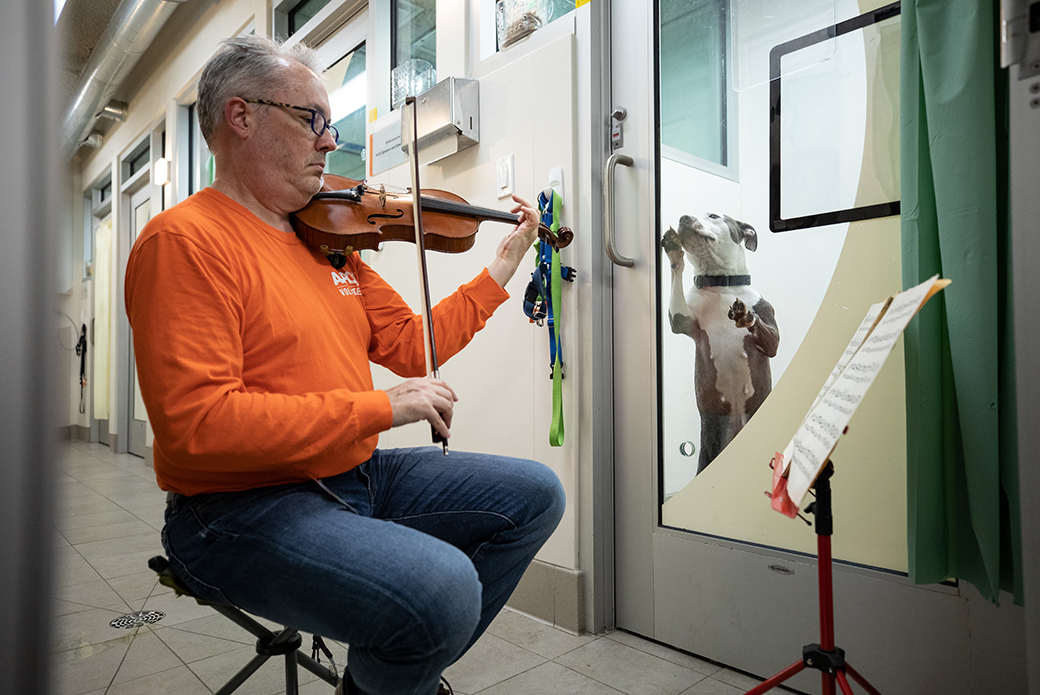 “I’ve played all over the world, in some of the great venues—the Sydney Opera House and Carnegie Hall—but all of that aside, my favorite audience to play for is right here at the ASPCA,” Martin says. “As a professional violinist I spend a lot of time on stage under bright lights, sort of feeling like the world is watching. Here, the world that’s watching are my best friends that are wagging their tails and will like it no matter what I do.”

Throughout his professional life, Martin has played with symphonies, performed at Lincoln Center, toured with legendary musicians and will soon take his talents to a Broadway orchestra, but his ability to captivate a crowd extends far beyond orchestra halls and large theaters—it even extends beyond those who stand on two legs. 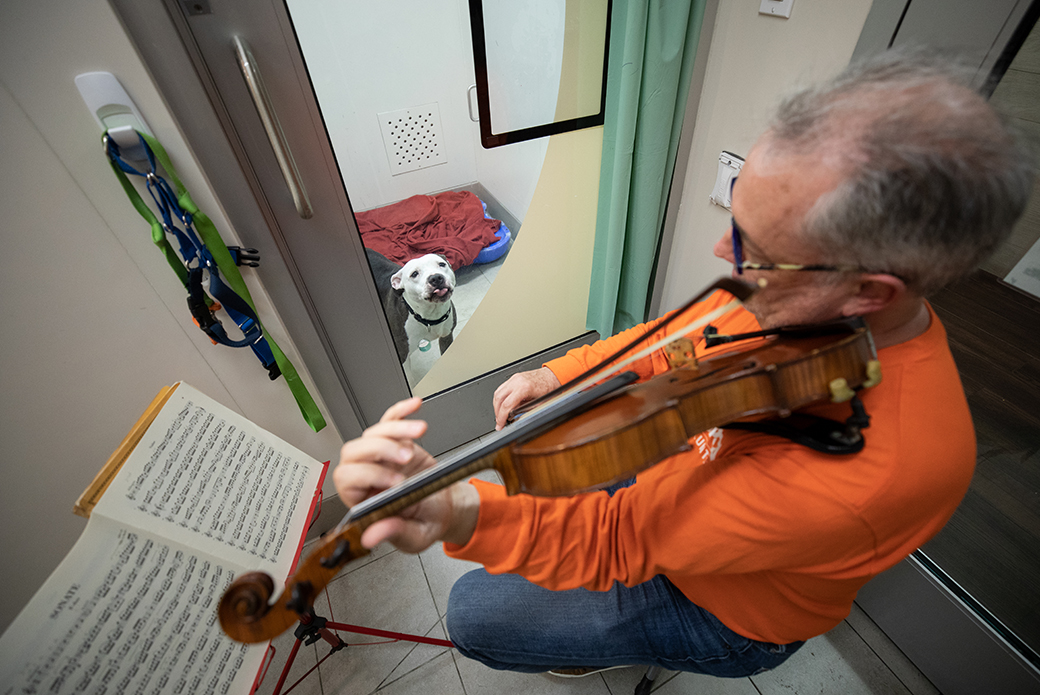 As Martin walks into the ASPCA’s Animal Recovery Center (ARC), many dogs begin to bark or jump up on their enclosures. But for many, the atmosphere changes when Martin begins to play music.

“I get immediate reactions,” Martin explains. “The barking dies down the minute my bow touches the strings. Some will sing along. I take that as a compliment.”

Recently, while Martin played, one dog was taken out of his enclosure for a walk but stopped, sat and listened to the sonata filling the room. The volunteer and the dog both listened until the number was complete before heading out for their scheduled walk.

While every dog in our care is unique, dogs who reside in both ARC and CARE “have endured long term neglect resulting in emaciation and chronic neglected medical conditions,” according to Kris. “Some animals require extended crate rest periods so that their fractures can heal. As many of these dogs aren’t even ready to be walked by volunteers, opportunities to socialize through other means are invaluable and help them to trust again. Martin generously donates his time and skill as a performer to our dogs that need the most love, and it’s incredible to see these animals transform into loving pets through our work and the help of socialization activities.” 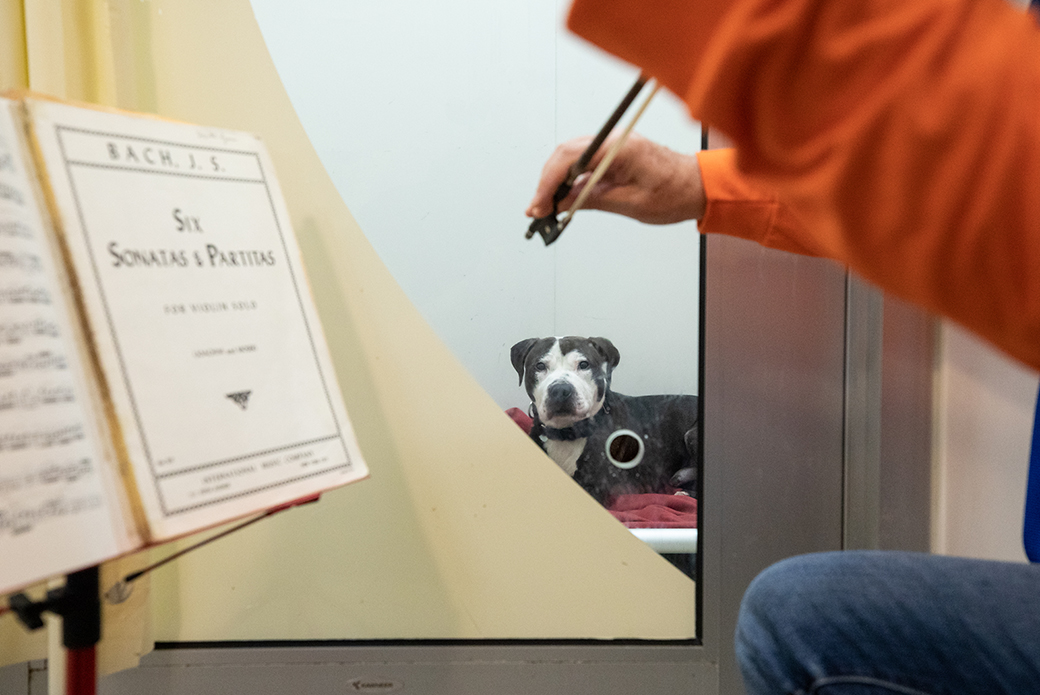 “I’ll never forget my first day,” Martin says. “Many of these dogs have been traumatized. Here they enter a process of recovery. We’re being kind to them. Some days, I have to hold back the tears. The dogs I play for are at different stages of their recovery and have been injured and/or neglected. The reactions I get from them—wagging tails, singing and watching them lie down and relax—is stunning to me. Not all of the dogs react in the same manner. They do seem happy.”

Martin’s contributions to cruelty victims is touching, and his music is enjoyed by all who are lucky enough to hear it. It’s people like Martin who make what we do at the ASPCA that much more rewarding, to see a once-abused dog, calm and comforted, maybe for the first time in their life, is just indescribable.

This October, as we celebrate Adopt a Shelter Dog Month, we encourage you to find ways you can get involved and give back to shelter dogs.