Taking antidepressants while pregnant raises the odds of gestational diabetes, a major study has found.

Researchers uncovered the link after analysing every birth in Quebec, Canada, between 1998 and 2015.

They found expectant mothers who took antidepressants were 19 per cent more likely to get gestational diabetes.

Two drugs in particular – amitriptyline and venlafaxine – had an even greater risk of mothers-to-be developing the condition.

Amitriptyline, which belongs to a class of antidepressants known as tricyclics and is branded as Elavil, put women at a 52 per cent heightened risk.

Venlafaxine, a serotonin and norepinephrine reuptake inhibitor (SNRI) sold under the brand name Efexor XL, was linked to a 27 per cent increased risk. 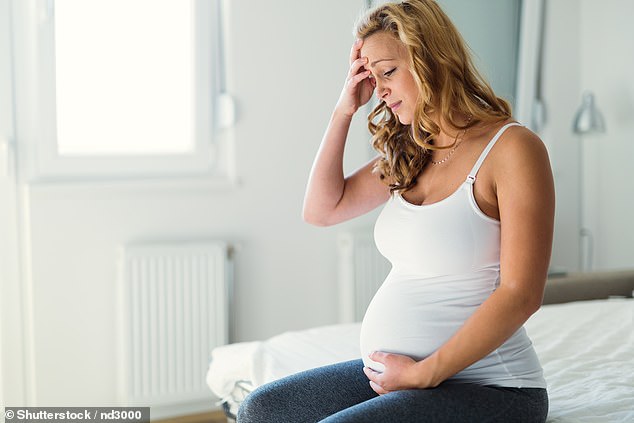 Women who take antidepressants face a significantly higher risk of gestational diabetes, a major study suggests. But researchers say it should not turn off severely depressed women from taking them (file image)

Researchers at the CHU Sainte-Justine medical centre in Montreal say the findings should not worry severely depressed women.

The study, published in the online journal British Medical Journal (BMJ) Open, is an observational one and can’t establish a cause.

The experts, led by Professor Maelle Dandjinou, also said there was no link to gestational diabetes in women taking SSRIs – the most common antidepressants.

In the UK, fluoxetine is probably the best known SSRI and it is sold under the brand name Prozac.

The researchers speculate that antidepressants directly affect glucose metabolism, particularly as serotonin is involved in this process.

Serotonin is found in the pancreas, specifically in the beta cells that release insulin to regulate blood glucose levels.

Recent studies have shown the hormone to play a key role in controlling insulin secretion and that its absence leads to diabetes.

WHAT IS GESTATIONAL DIABETES?

Gestational diabetes is a type of diabetes that affects pregnant women, usually during the second or third trimester.

Women with gestational diabetes do not have diabetes before their pregnancy. It usually goes away after the birth.

It occurs when the hormones produced during pregnancy make it difficult for your body to use insulin properly, putting you at an increased risk of insulin resistance.

Women can significantly reduce their risk of developing gestational diabetes by managing their weight, eating healthily and keeping active.

Figures estimate one in five women will develop gestational diabetes during pregnancy.

The researchers also note that one of the side effects of antidepressants is weight gain – a risk factor for type 2 diabetes.

They drew on information from the Quebec Pregnancy Cohort, which includes all pregnancies in Quebec between 1998 and 2015.

There were 20,905 cases of gestational diabetes after 20 weeks of pregnancy.

Researchers randomly matched them with 10 unaffected pregnancies (209,050) of the same age and calendar year of delivery.

Antidepressant use was assessed using information on prescriptions filled for these drugs between the start of pregnancy and the diagnosis of gestational diabetes.

In all, 9,741 – just over four per cent – of the mothers took antidepressants.

Researchers then took account of potentially influential factors, such as the mother’s age, welfare assistance, area of residence and other underlying conditions.

Writing in the study, the researchers said: ‘In this study, overall antidepressant use was associated with an increased risk for GDM.’

The research team also found the chance of gestational diabetes went up the longer the mothers-to-be had been taking the drugs.

Women who had been using antidepressants for less than 90 days saw a 15 per cent increased risk of gestational diabetes.

Those who had been taking the drugs for less than 180 days were at a 17 per cent heightened chance of getting the condition.

Meanwhile, expectant mothers who had been using the drugs for more than six months faced a 29 per cent greater risk.

Gestational diabetes affects around one in five pregnant women across the world, figures suggests.

The condition occurs when a woman’s body cannot produce enough insulin to meet the extra needs of pregnancy, which causes blood sugar levels to spike.

The children of these pregnancies may also be more vulnerable to obesity and diabetes later on, according to other research.

Diabetes affected 422million people globally in 2014, according to the World Health Organization. Some 90 per cent of adult patients suffer from type 2.

Previous: Gutmann wins prestigious neuro-oncology prize
Next: 'Why Didn't Anyone Ever Tell Me I'd Poop My Pants While Running Post-Baby?'
Related posts
Pet Care News