New HIV diagnoses in England are the lowest since 2000 as official figures reveal 4,500 were diagnosed with the infection last year

New HIV diagnoses in England hit an 18-year low in 2018 after falling for the fourth year in a row.

It comes after the country last year hit the United Nations target of having at least 90 per cent of HIV patients with such low levels of the virus that they can’t pass it on.

PHE attributed the fall to ‘enormous testing and prevention efforts’ but the Terrence Higgins Trust, which noted progress is slowing, said more work needs to be done because there are still ‘unacceptable’ numbers of people being diagnosed late. 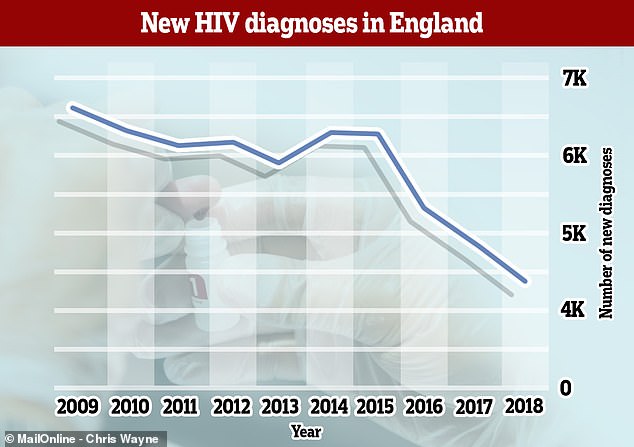 The number of new HIV cases was last year the lowest it has been since 2000, according to Public Health England, and 28 per cent fewer people were diagnosed than in 2014

But there were fewer than three quarters as many diagnoses as there were four years ago. There are about 101,000 people living with HIV in the UK.

PHE’s head of HIV surveillance, Dr Valerie Delpech, said: ‘It is thanks to the enormous testing and prevention efforts in the UK that we are seeing further declines in new HIV diagnoses, which have now reached their lowest in almost 20 years.

‘People with HIV now benefit from effective treatments that stop the virus being passed on to sexual partners and the number of people diagnosed late is lower than ever before.’

Dr Olwen Williams, the president of the British Association for Sexual Health and HIV, added: ‘BASHH welcomes the ongoing downward trend in new HIV diagnoses in line with the target of eliminating HIV by 2030.

‘The data demonstrates promising progress in HIV elimination, especially in London, and highlights the need to extend this progress nationally.

An online pharmacy has almost halved its price for the HIV-prevention drug, PrEP.

The drug is almost 100 per cent effective at preventing people from catching the infection and is currently being trialled by the NHS.

It’s routinely available in Scotland and Wales but not in England, and pharmacy site Doctor-4-U has dropped its price from £49.99 for a month’s supply – down from £90.

James O’Loan, consultant pharmacist at Doctor-4-U, said: ‘It is shocking that

PrEP is still not widely available in England, especially when patients in Scotland are able to access it relatively easily.

‘By launching this price drop we aim to increase awareness about the current situation and spark a conversation about why this is the case.

‘We believe that healthcare should be affordable for all and we have made generic branded PrEP available at a much lower price to ensure those in need have access to the drug.

‘If PrEP was made widely available it would spark a dramatic decrease in the number of HIV cases in this country.’

The medication, taken either once a day or twice either side of sex, works for as long as there is enough of the drugs in the patient’s system, by blocking HIV if it enters the body.

‘Whilst the results are encouraging, sexual health and HIV services are operating against a background of rising STI rates, reduced budgets and a lack of clarity regarding the implementation of national-level PrEP funding commitments.’

HIV is a virus which infects the blood and damages cells in the immune system, making patients less able to fend off other infections and illnesses.

If left untreated for years it can develop into AIDS, which is fatal, but modern medicine is able to stop this happening in people who are diagnosed in time.

Antiviral medications can also reduce patients’ levels of the virus to such small quantities that they are not affected by it and cannot pass it on.

Early diagnosis is key, however – most cases of the infection are spread by people who don’t know they’re HIV positive and therefore may not use condoms.

But HIV may only cause a flu-like illness for a week or two after they’ve become infected with the virus, then not have any symptoms for decades afterwards.

Public Health England’s figures showed that nearly half of people diagnosed with HIV last year were in the late stages of the infection, meaning they had had it for years without knowing.

These patients are more likely to spread the virus and may be at a 10 times higher risk of dying within a year of diagnosis.

Chief executive of the Terrence Higgins Trust, Ian Green, said: ‘While new diagnoses are falling, the proportion of people still being diagnosed late remains stubbornly and unacceptably high at 43 per cent.

‘This is so important because a late diagnosis is bad for an individual’s health and also significantly increases the chances of HIV being unwittingly passed on.

‘Heterosexual men and those aged 50 or over remain two of the groups most affected by late diagnosis, which means more needs to be done to engage these groups around HIV and regular testing.’ 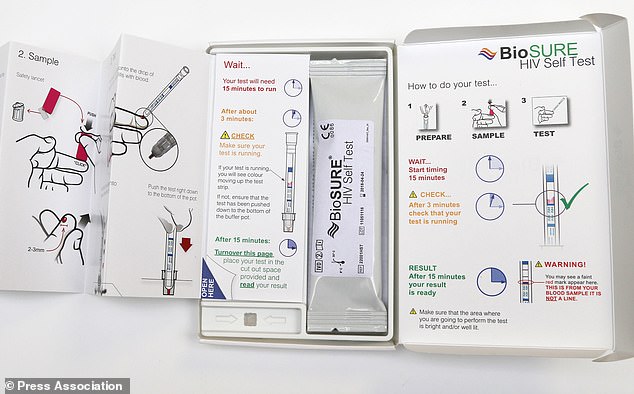 People can now test themselves for HIV at home and the tests can be bought by anyone. The charity Terrence Higgins Trust sells them for £15 each

The groups who had the most HIV diagnoses last year were men between the ages of 25 and 49 and those who were gay, white, British or living in London.

The Government has set a target of having no new cases of HIV diagnosed in the UK from 2030.

And it last year hit the United Nations’ 90-90-90 target for getting people diagnosed, treated and with non-contagious levels of the virus in their bodies.

In the UK, 92 per cent of people living with HIV are diagnosed; 98 per cent of those are receiving treatment; and 97 per cent of them have an undetectable viral load, which means they can’t pass on HIV.

In light of today’s figures the Terrence Higgins Trust renewed its call for the Government to widen a trial of HIV-preventing drug PrEP.

It is currently on a three-year trial scheduled to end next year, but Mr Green said he wanted it to be made part of routine sexual health services.

The drug is given to people at high risk of contracting the virus and, although it can’t cure the illness, is almost 100 per cent effective at preventing HIV when taken as prescribed.

It involves a pill containing a combination of two anti-HIV drugs, emtricitabine and tenofovir, taken daily or around the time of sexual activity.

WHY MODERN MEDS MEAN HIV IS NOT A DEATH SENTENCE

Then, ART (anti-retroviral therapy) was made, suppressing the virus, and meaning a person can live as long a life as anyone else, despite having HIV.

Drugs were also invented to lower an HIV-negative person’s risk of contracting the virus by 99%.

In recent years, research has shown that ART can suppress HIV to such an extent that it makes the virus untransmittable to sexual partners.

That has spurred a movement to downgrade the crime of infecting a person with HIV: it leaves the victim on life-long, costly medication, but it does not mean certain death.

Here is more about the new life-saving and preventative drugs:

It suppresses their viral load so the virus is untransmittable

In 1996, anti-retroviral therapy (ART) was discovered.

The drug, a triple combination, turned HIV from a fatal diagnosis to a manageable chronic condition.

It suppresses the virus, preventing it from developing into AIDS (Acquired Immunodeficiency Syndrome), which makes the body unable to withstand infections.

After six months of religiously taking the daily pill, it suppresses the virus to such an extent that it’s undetectable.

And once a person’s viral load is undetectable, they cannot transmit HIV to anyone else, according to scores of studies including a decade-long study by the National Institutes of Health.

It is 99% effective at preventing HIV

This pill works like ‘the pill’ – it is taken daily and is 99 percent effective at preventing HIV infection (more effective than the contraceptive pill is at preventing pregnancy).

It consists of two medicines (tenofovir dosproxil fumarate and emtricitabine). Those medicines can mount an immediate attack on any trace of HIV that enters the person’s bloodstream, before it is able to spread throughout the body.

Previous: Suffering from COPD? Here are some exercises you can do
Next: Study reveals worrying decline in medication use after heart surgery
Related posts
Pet Care News