Boots and Morrisons have today been told to recall their own-brand versions of Zantac amid fears they may contain a cancer-causing chemical.

Perrigo Company supplies ranitidine – the generic form of the branded heartburn drug – to both of the British retail giants, as well as several others.

But the pharmaceutical firm has now announced a recall of eight types of its drug, including two Boots-branded and one Morrisons-branded versions.

Galpharm and Kirkland’s medications have also been affected, and so have two other forms of the most-recognised brand Zantac that Perrigo produces.

It is feared some ranitidine pills may contain traces of NDMA, or N-nitrosodimethylamine – a chemical considered to be carcinogenic to humans.

Major American retailers including Walmart and Walgreens have already pulled Zantac – and generic forms – from their shelves because of the cancer fears. 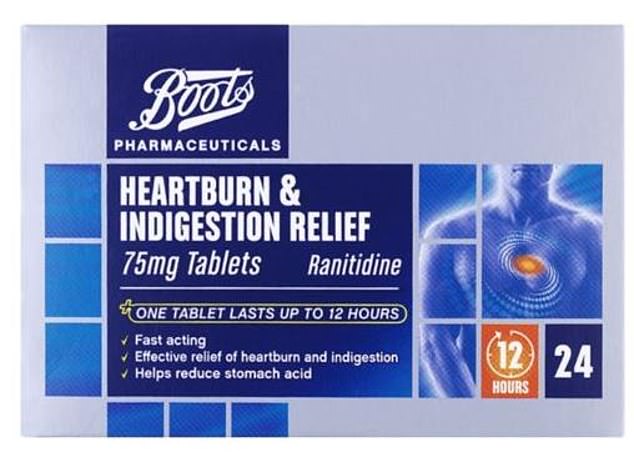 Perrigo Company supplies ranitidine – the generic form of the branded heartburn drug – to both of the British retail giants, as well as several others 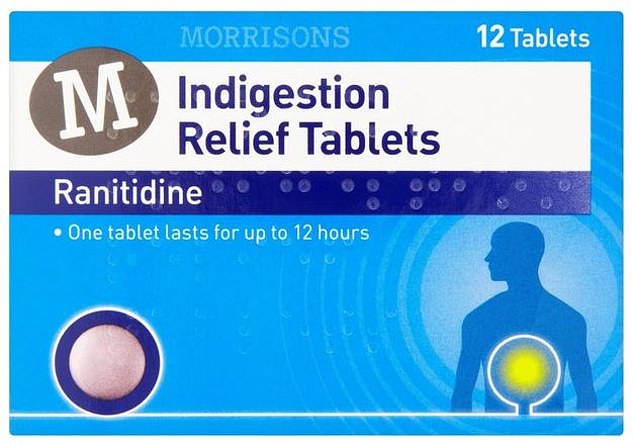 But the pharmaceutical firm has now announced a recall of eight types of its drug, including two Boots-branded and one Morrisons-branded versions

And other Zantac distributors in the UK, such as GlaxoSmithKline and Teva, have voluntarily recalled versions of their drugs over the same NDMA concern.

The latest alert, from Dublin-based Perrigo Company, was sent out by a UK watchdog which polices the safety of drugs.

One of the drugs that has been recalled is prescription-only. The rest are available over-the-counter, according to the alert.

The Medicines and Healthcare products Regulatory Agency (MHRA) said companies have been asked to quarantine all affected batches.

The Government-run body added there is no evidence NDMA causes harm to patients and that the Perrigo recall is only ‘precautionary’.

Concerns that ranitidine contained traces of NDMA first emerged in June when US-based pharmacy Valisure first discovered it in some of its Zantac products.

The FDA issued a warning about the impurity on September 13, and launched an investigation alongside European officials to determine the risk to patients.

It is unclear how long the fault dates back to – but some blood pressure pills recalled earlier this year due to a similar impurity had already been on the market for two years.

Valisure’s initial research found that NDMA was the result of the ‘inherent instability’ of the ranitidine molecule.

REVEALED, HOW THE ZANTAC SCANDAL UNFOLDED

SEPTEMBER 13 – The FDA confirms some batches of ranitidine pills, including Zantac, contain trace amounts of NDMA and launch an investigation

Valisure asks the FDA to recall all products containing ranitidine. It says the impurity was the result of the ‘inherent instability’ of the ranitidine molecule, claiming every ranitidine-based drug could be affected

SEPTEMBER 23 – The Irish equivalent to the MHRA – the Health Products Regulatory Authority – recalls 13 medications containing ranitidine, including seven versions of Zantac. It says the fault comes from the manufacturing plant of the chemical in India

Sandoz recalls its generic version of ranitidine in the US

SEPTEMBER 24 & 25 – GlaxoSmithKline recalls four different types of Zantac in Hong Kong. The next day, it pulls the drug in India, where it is branded as Zinetac. It also halts global distribution of the popular medicine

SEPTEMBER 28 – US retailer CVS removes Zantac and its own generic ranitidine products from 6,200 of its stores over NDMA fears

It claims that all versions of the drug are affected and could generate very high levels of NDMA in the human body.

But health officials in various countries instead suspect the fault comes from the manufacturing plant of the chemical in India.

Zantac is not the first medication to be recalled in the UK over fears it could contain NDMA.

The MHRA has pulled a series of heart drugs in the last year after tests revealed some batches contained NDMA or a similar chemical.

NDMA is the acronym for N-Nitrosodimethylamine, a chemical byproduct of many industrial manufacturing processes.

The compound can be disruptive to DNA, which may cause cancer.

It doesn’t degrade, or break down, naturally in the environment or our bodies, meaning that it accumulates over time and our exposures only build up, earning it the nickname ‘forever chemical’.

NDMA is created in the production of rocket fuel, from which it has leached into our water supply.

It’s also common in low quantities in many foods, such as cured or smoked meats, fish and beer as well as tobacco smoke.

Animal studies have shown the chemical to cause colorectal, kidney, stomach and kidney cancers at high exposures.

In humans, on the other hand, studies have only linked the chemical to higher risks of cancers.

No human cases of cancer caused by NDMA have been reported, and the World Health Organization (WHO) considers it a ‘probable’ human carcinogen.

Tags: and, Are, boots, Morrisons&apos;, of, Own, recalled, version, Zantac

Previous: Sculpt Your Legs From All Angles With These Lateral Squats
Next: How to Crush the CrossFit Open 20.3 Workout
Related posts
Pet Care News